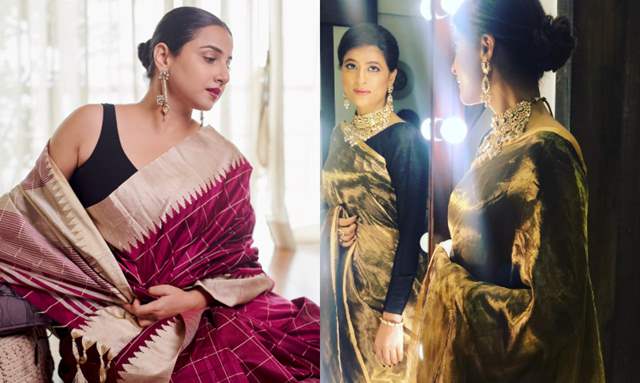 Bollywood divas like Vidya Balan, Tahira Kashyap, Dia Mirza, and many more are often seen draped in the six yards of elegance on a number of occasions. Their love for handwoven fabric has encouraged fans to preserve the craft and mastery of handlooms artists.

Today on the occasion of ‘National Handloom Day’, actresses shared special posts reflecting on their stories depicting the importance of love, hope and belief followed by encouraging others to support and promote local business.

One look at Vidya Balan's social media is enough to depict her love for handlooms and local designers. The actress has always promoted local business against the high-end brands offering a platform for the small scale industries across nations to showcase their talent.

Marking the occasion of Handloom Day, Vidya Balan penned a heartwarming note encouraging everyone to promote the local artisans.

Sharing pictures of herself in a silk handloom saree, Vidya Balan said, "The beauty of silk blossoms in the handlooms. The artistry and allure of Handloom Indian Silks are unmatched. Let us wear handloom silk products with pride and celebrate the magical creations of our weavers, today and everyday! That alone would be a fitting tribute to their passion and devotion towards their masterful craft."

Known for her heartfelt, candid and striking style of storytelling, Tahira Kashyap Khurrana has been an inspirational force on social media. Narrating yet another incident, depicting the importance of love, hope and belief, Tahira shares her handloom story.

With throwback pictures from 2018, Tahira Kashyap Khurrana took a look back at her chemotherapy days saying, "This is from 1 December 2018. I was done with 10 chemotherapy sessions. Used some spray and powder to cover the areas from where I was losing hair. But did I want to shy away from the world? Nope! Love from family and friends and most importantly my faith in my practice lead me to believe and know that this version of myself is beautiful too. This is my #handloom story".

Dia Mirza did not share a picture of her in a saree, instead used a creative symbol to celebrate the day. Along with the same she penned - “On #NationalHandloomDay2021, let’s come together to celebrate the culturally rich and incredible textiles of India. Let’s appreciate the hands behind the looms that work meticulously to weave the finest of the fabrics.”

For the unversed, National Handloom Day is celebrated on August 7 of every year to honour the handloom weavers of the country. It is a day that also recognizes the Swadeshi Movement which was launched on the same date in 1905.

Handlooms have been a significant face of India's fight for freedom and it also celebrates the art that the nation conserved for generations.