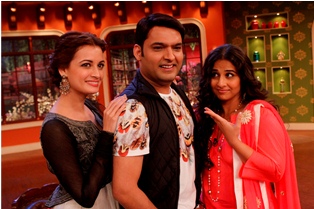 If there is one thing that Kapil Sharma guarantees on his show when female guests are involved, it's the knowledge that at some point or another, his flirtatious sentiments will take over resulting in lots of laughs!

Recently, when Vidya Balan and Dia Mirza visited the sets of Comedy Nights With Kapil on Colors to promote their upcoming film Bobby Jasoos, Kapil Sharma brought up the topic of one of Vidya's recent interviews in which she had affirmed that there would not be a better husband than Kapil Sharma. His impeccable comic timing then matched his wit as the comedian asked the looming question, "Then why Sid?"

When Vidya told him it still was not too late for him, Dia quickly quipped in saying that Kapil would be breaking a lot of hearts if he got married to Vidya. Kapil, on cue, began humming Diya's hit romantic song - Dil Ko Tumse Pyaar Hua, while openly flirting with her too! Seeing that she was clearly losing out on Kapil's attention, Vidya Balan recited an authentic Hyderabadi shayari which effectively stumped Kapil Sharma and forced him into silence for the first time ever. Feeling quite generous, Kapil decided to fulfill Vidya Balan's longstanding wish of wanting to act with King Khan (Shah Rukh Khan). He asked both the ladies to enact a scene from Devdas - where Kapil took the mantle of portraying SRK's role himself! In fact, he made his older love Vidya play the role of Paro and his hot new favorite Diya the role of Chandramukhi!

When the women began fighting for Kapil's attention and love, realization dawned upon Vidya who quickly stopped arguing and said, "Billiyon ke jhagde mein bandar maze le raha hai!" And then, in a never-seen-before twist, both ladies ganged up against Kapil and showed him who's boss!

iPerfection 6 years ago Hahaha
Gonna watch this episode for sure.
I cant wait for Bobby Jasoos!
Vidya will rock again and beautiful Dee is always awesome. Wish her lots of succes as a producer!

These two women against Kapil... a thing to watch out for!!!