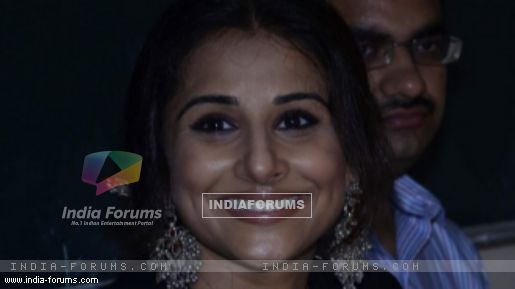 Vidya Balan has faced scrutiny for her fashion sense but more often than not, she has got her look right in a sari. On Anupam Kher's chat show, the National Award winning actress left the veteran actor impressed in a traditional handloom creation.

During her appearance on Colors' "The Anupam Kher Show - Kucch Bhi Ho Sakta Hai", Vidya got a special greeting from Anupam when she entered, says a source.

"Oh, you look lovely in this sari," Anupam said in admiration of the handwoven Maheshwari silk sari that the actress wore for the show.

After the shoot wrapped up, Anupam, whose wife Kirron Kher too has a striking collection of traditional saris, went on to ask Vidya who her designer was.

Vidya said: "It's a sari designed by Rahul Mishra, he does some really lovely stuff."

Mishra has given Vidya a thumbs up for flaunting the sari even better than it looked on the ramp when he showcased it as part of his festive collection.

"With the sari, her hairstyle and make-up, Vidya reminded me of her look in the movie 'Parineeta'. The way Vidya ends up choosing authentic handwoven fabrics, it's commendable. Not many actresses touch handwoven fabrics as they don't necessarily fall as easily as fabrics like chiffon and georgette. So I give her full marks," Mishra added.

The episode featuring Vidya in a chat with Anupam, will be aired on Colors Sunday.