View Profile
Anees Bazmee's next rib-tickling film, Thank you, is all set to hit the theatres on the 8th of April and if the list of talented actors for 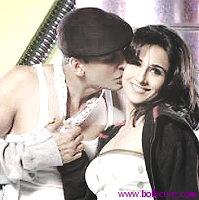 the film wasn't enough, Bazmee had added another - the one and only Vidya Balan!
It is believed that Vidya will hop into the role of playing wife to Akshay Kumar in the film and will be seen in flashbacks of Akshay's past. The beauty is only missing from the promos of the movie as the directors wanted it to be a surprise. So much for the surprise now!
Akki and Vidya have previously worked together for films such as Heyy Baby and Bhool Bhulaiya, both which were commercial successes. Perhaps, it is for this reason as to why Bazmee has chosen Vidya once again.
The cast of Thank You consists of Akshay Kumar, Sonam Kapoor, Suniel Shetty, Bobby Deol, Irrfan Khan, Celina Jaitely, Rimi Sen and now Vidya Balan.
With such great actors, Bazmee sure has a winner on his hand!
Editor(s): Medha & Jenifer.
Graphics: Zunni.
11 Likes

Parth Samthaan: Kasautii Zindagii Kay has shaped me as an ...
30 minutes ago