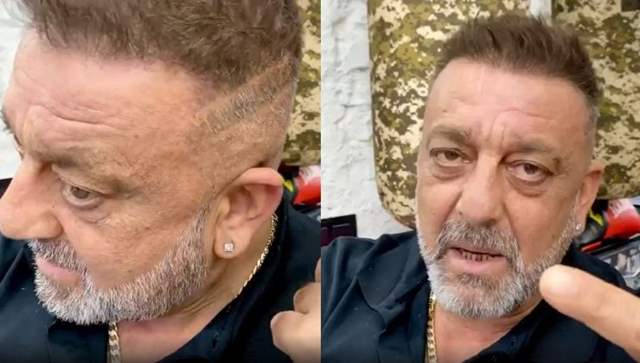 Few months ago, Sanjay Dutt was diagnosed with lung cancer. There were also reports that his cancer is on Stage 3 and the actor had announced a break from work for his treatment. His wife Maanayata Dutt had shared that the initial treatment will happen in Mumbai.

Dutt had made a quick trip to Dubai to take a break from his treatment and has now returned back to Mumbai. Recently, the actor visited celebrity stylist Aalim Hakim's salon for a haircut.

Sanjay Dutt's friend and stylist Aalim Hakim shared a video on his social media where the actor can be seen braving his scar post cancer treatment. In the video, Dutt confidently says that he will beat cancer and come out of it soon.

Sharing the video on his official Instagram handle, Aalim Hakim wrote, "ur Favourite Rockstar Sanjay Dutt With A Heart Of Gold At Salon HA."

Post the treatment, Sanjay Dutt will soon resume work. He was spotted the Yashraj studios in Mumbai where he was reportedly shooting for Shamshera, also starring Ranbir Kapoor and Vaani Kapoor.

Maanayata had taken to social media to laud his never give up attitude and penned an inspirational note: “Rukk jaana nahin tu kahin haarke....kaanto pe chalke milenge saaye Bahar ke!! We have to fight through some bad days to earn the best days of our lives!! Never quit!!"

On the work front, Sanjay Dutt has a number of projects in his pipeline including Shamshera, Prithviraj, KGF 2 and others.