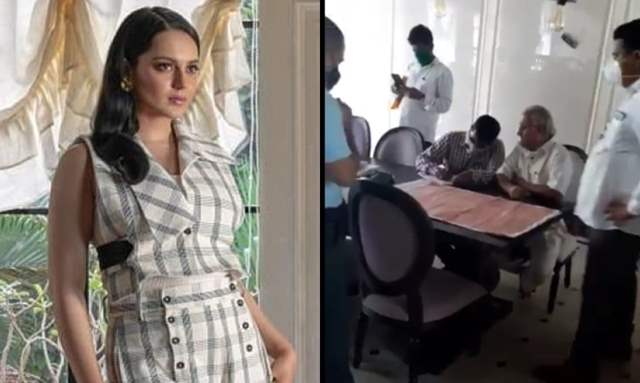 Kangana Ranaut’s tiff with the Maharashtra government seems to have escalated to one level higher. The actress shared videos on her official Twitter handle and informed that the BMC visited her office, Manikarnika Films Pvt Ltd in Mumbai, without any notice and began 'measuring everything'.

In her tweet, Kangana mentioned how she has built her dream office with 15 years of hard work. She tweeted, "They have forcefully taken over my office measuring everything, also harassing my neighbors when they retorted @mybmc officials used language like ,"Woh jo madam hai uski kartoot ka parinaam sabko bharna hoga" I am informed tomorrow they are demolishing my property."

In another tweet, Kangana wrote, "I have all the papers, BMC permissions nothing has been done illegal in my property, BMC should send a structure plan to show the illegal construction with a notice, today they raided my place and without any notice tomorrow they demolishing entire structure."

Check out her tweets below:

This comes after Kangana Ranaut and Shiv Sena leader Sanjay Raut indulged in a war of words. It all started after Raut asked the actress to not come back to Mumbai over her comments against Mumbai Police. To which, the actress had remarked, “Why Mumbai is feeling like Pakistan occupied Kashmir?”

The rift continued after Raut called Kangana “haramkhor” and the Maharashtra Navnirman Sena (MNS) issued a warning against defaming Mumbai. Ms Ranaut had reacted to the slur and said: "Why were actors Aamir Khan or Naseeruddin Shah not called h*******r when they said they felt unsafe living in India?"

Amid the backlash, Kangana also announced her return to Mumbai, and the Centre has extended Y-plus category security, including a Personal Security Officer and 11 armed policemen including commandos for her protection.