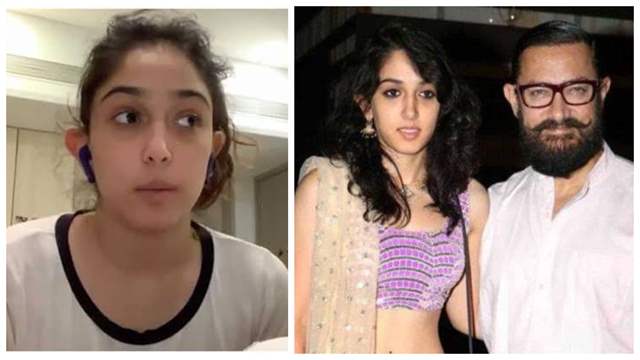 Last month, Aamir Khan's daughter Ira Khan shared her struggle against depression and revealed that she has been clinically depressed for more than four years now.

And now in a recently released video, Ira opened up about how her privileged life made her doubt her mental health and that her parent’s divorce also did not cause her sadness.

In the 10 minutes long video, Ira started off by talking about her privileges of being Aamir Khan’s daughter and getting diagnosed with depression. “I never spoke to anyone about anything because I assumed that my privilege meant I should handle my stuff on my own, or if there was something bigger, it would make people need a better answer than “I don’t know.” It made me feel like I needed a better answer and until I had that answer, my feelings weren’t something I should bother anyone else with. No problem was big enough to ponder too long about. What would anyone do? I had everything. What would anyone say? I had said it all.”

Ira also talked about how she would sleep a lot  and cry all the time without any reason. She also shared that she would cancel all plans with her friends.

Ira revealed that she was sexually abused at the age of 14 and that her parents helped her get through the difficult phase. In the video, Ira said, "When I was 14, I was sexually abused. That was a slightly odd situation in the sense that I didn't know whether the person knew what they were doing, I sort of knew them. It wasn't happening every day."

Furthermore, Ira stated that she could not understand the reasons behind her depression, and added that even her parents’ divorce-Aamir and his ex-wife Reena Dutta-did not cause her any sadness.

“When I was small, my parents got divorced. But that didn’t seem like something that would traumatise me because my parents’ divorce was amicable. They are friends, the whole family is still friends. We are not a broken family by any means,” she said in her video.

Previously when Ira had opened up about her depression, Kangana Ranaut had reacted to the same and wrote on social media, “At 16 I was facing physical assault, was single handedly taking care of my sister who was burnt with acid and also facing media wrath, there can be many reasons for depression but it’s generally difficult for broken families children, traditional family system is very important.”

Speaking further about her parent’s divorce, Ira said, “My parents were very good about being parents to Junaid and me, even after divorce. And when people would say ‘Oh I am so sorry to hear about your parents’ divorce, I would be like (shrugs) ‘What are you talking about??It is not a bad thing. Another privilege I didn’t realise. It could be something that could scar you. It didn’t scar me. I don’t remember most of it but I didn’t feel like my parents’ divorce is something that could bother me. So that can’t be the reason why I am feeling so sad.”

Ira is Aamir Khan's daughter with first wife Reena Dutta. Khan married Reena Dutta on 18 April 1986 and they have two children Junaid and Ira. In December 2002, Khan filed for divorce and Reena took custody of both children.

Later in 2005, Aamir Khan married Kiran Rao, and the couple announced the birth of their son, Azad Rao Khan through surrogacy in 2011.