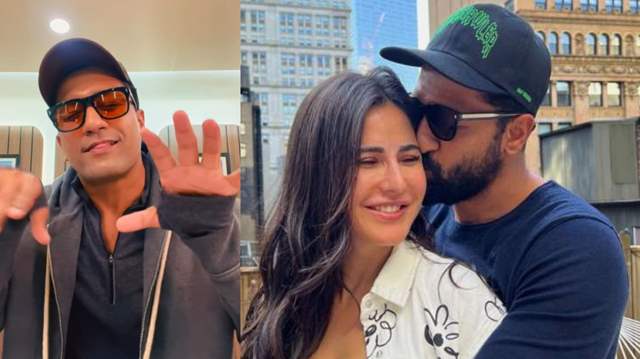 Vicky Kaushal and Katrina Kaif are one of the most adored couples in the industry. Since their wedding, they have been sharing major couple goals and fans gush over their sweet bond and chemistry.

Currently, Vicky Kaushal is all over social media owing to the release of the songs from his upcoming film 'Govinda Naam Mera'. Recently, his song 'Kyaa Baat Hai 2.0' was unveiled and fans have gone gaga over it. With the peppy beats and grooves, the track has been gaining a lot of popularity. Now the URI actor has taken to his social media handle and once again won the hearts of his fans.

Vicky shared a video wherein he could be seen lip-syncing to his song 'Kyaa Baat Hai' and grooving on it, while recording it in a selfie-cam mode.

The best part about Vicky's post was his caption where he wrote, "My wife begs me not to put up such videos, but I can’t help it. Hopefully one day she’ll say… “KYAA BAAT HAII!!!” 🤷🏽‍♂️😎🕺🏽".

In the video he could be seen donning a grey sweatshirt with a cap and a cool glasses.

Vicky Kaushal is all set for the OTT release of his film 'Govinda Naam Mera' which will also star Kiara Advani and Bhumi Pednekar in lead roles. The comedy-thriller is helmed by Shahsank Khaitan and is backed by Karan Johar's Dharma Productions. The trailer of the film has already created a hype all over and to elevate the excitement, makers have been releasing back to back songs from the album. 'Govinda Naam Mera' is all set to to stream on Disney Plus Hotstar from 16th December.