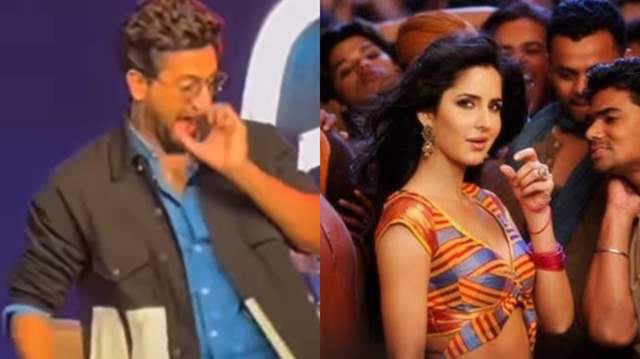 There is no doubt in the fact that Vicky Kaushal and Katrina Kaif are one of the most loved couples in B-town. The couple tied knot in December of last year, and since then, they've been posting some gorgeous, romantic photos on Instagram. The two are frequently seen praising one another and encouraging one another's creative endeavours.

Now, recently at the trailer launch event of the film, Vicky was spotted dancing to his wife Katrina Kaif's dance tune Chikni Chameli at the release of the Govinda Naam Mera teaser.

At the premiere of the trailer, Vicky Kaushal was joined by his co-stars Kiara and Bhumi. At the event,  Karan Johar presided over a game that required the participants to both guess and perform the song's hook steps throughout the event. In a social media video going viral, KJo declares that Vicky will perform to his "dharam patni" Katrina Kaif's big songs. After that, Vicky may be seen briefly bopping to the tune of Kala Chashma. He also flawlessly executed the hook step from Katrina's hit song Chikni Chameli. The audience clapped and applauded for the Uri star as he performed the hook dance.

Govinda Naam Mera stars Vicky Kaushal, Bhumi Pednekar and Kiara Advani in the lead roles. The film is being produced by Dharma Productions and has been written and directed by Shashank Khaitan.