View Profile
Big Boss 4 fame Veena Malik, who created waves on the small screen with her scandalous ways in the nation's most 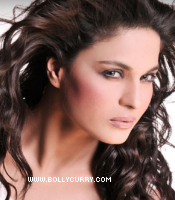 watched house, is now all set to make her debut appearance in Bollywood. Veena will be seen luring the audience in the much-anticipated Ritesh Deshmukh and Genelia D'Souza starrer, Tere Naal Love Ho Gaya, in an item song called "Main To Teri Fan Ho Gayi".
According to the Pakistani actress, she had received multiple item number offers post her release from the house but felt that this was the most opportunistic and spiciest one. Veena was also heard expressing hopes that the Pakistani film industry follows Bollywood's footsteps in making more ventures.
Tere Naal Love Ho Gaya, which also rumors to have Abhishek Bachchan in a cameo, is expected to hit the silver screen sometime next year.
Will Veena prove to be a strong contender against the item girls of Bollywood? Or should she leave it to our pros? Let us know!
Editors: Medha & Jenifer
Graphics: Sano