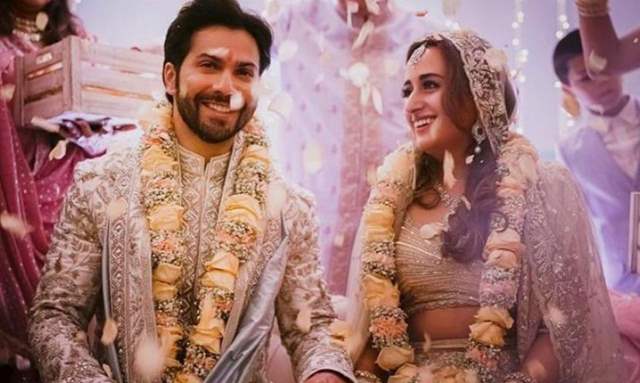 Varun Dhawan’s longtime girlfriend and designer Natasha Dalal recently walked down the aisle and the lovebirds have finally exchanged their wedding vows. The two have finally been pronounced as husband and wife.

The couple took their wedding vows in a traditional wedding ceremony at The Mansion House resort in Alibaug on 24 January in the presence of their family members and their close friends.

According to a report, the rituals of Varun Dhawan and Natasha Dalal's wedding began at 6 pm, today and the couple is finally married.

The couple decided to keep their wedding an extremely private affair and a strict no-phone policy was also followed at the venue to ensure that the couple’s wedding pics don’t get leaked on social media. As a result, the staff's camera phones have been sealed at The Mansion House.

As reported earlier, the newlyweds were to pose for the shutterbugs post their wedding rituals and we finally have the first glimpse of the newlywed couple.

This will be the first time that Varun and Natasha will be posing as Mr and Mrs.

We congratulate the newlywed couple and wish them a happy married life....

zara_112 1 months ago Congrats to Varun and Natasha, they look so good and happy together.