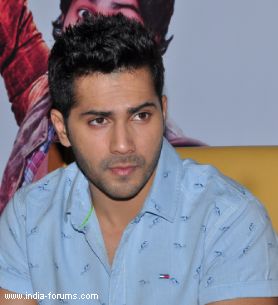 Last week Varun Dhawan's promotional event with Alia Bhatt for "Humpty Sharma Ki Dulhania" in Chandigarh turned out to be a surprise for his fans. He sang live on stage with rapper Badshah.

"Alia persuaded me to sing on stage. We started singing at promotional events in North India in Ludhiana, Chandigarh and Delhi. Luckily for us, the song Saturday, Saturday is already doing very well," said Varun.

"For the first time in my life, I performed a rap section with Badshah on stage in Chandigarh Sector 17 in front of 10,000 people. I can't put the experience in words. You see, Punjabi rap has become really big with Yo Yo Honey Singh, Gippy Grewal and Badshah. It's trending. The rapper's role suits my character Humpty, that's why I agreed."

Three-film old Varun confesses this was his way of making the promotions unique.

"I had to make the promotions this time completely different from what I had done for my previous release 'Main Tera Hero'. I didn't want to repeat myself. I wanted Alia and I to find new ways of entertaining people. So the USP that we thought up this time was that we sing. Yeah, Alia and I have tuned singers to promote 'Humpty...," said the actor who started his career in 2012 with "Student of the Year".

Unlike Alia and Shraddha Kapoor, who have sung professionally for their films, Varun has no such plans at the moment.

"Shraddha and Alia are doing some great singing. I am not a trained singer, or anything. But if I am encouraged to hum or rap a few lines, as I was in Chandigarh, I don't mind singing. Haven't many of our stars from - Bachchan Saab (Amitabh Bachchan), to Salman Bhai (Salman Khan) to Shah Rukh (Khan) and Govinda sung for their films?"