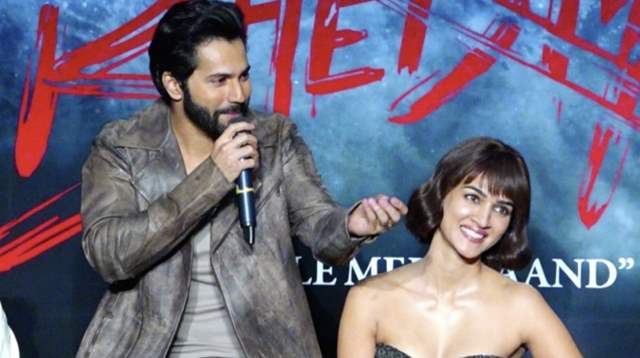 Today Bollywood actors, Varun Dhawan and Kriti Sanon launched the trailer of their upcoming film Bhediya. The film is a horror comedy and is one of its kind. The trailer shows a sneak peek of Varun turning into the werewolf and telling Kriti who plays a doctor, about the changes in his bodyz while Varun's character, Bhaskar, tries to find answers with his friends.

At the media event, team Bhediya had a fun interaction and Varun accidentally let out an inside scoop. Dr Anika aka Kriti Sanon was asked if she would like to also play the role of a creature or a horror character. To which, Kriti joked, "Mere andar sirf real life mein jaanwar aata hai. Screen pe (nahin aata)."

Varun Dhawan then suddenly added into the conversation and asked Dinesh Vijan, "Wasn't there a script that you had run by her?"

Dinesh Vijan added, "Varun Dhawan constantly wants controversies. He wants his stories to track and he wants his trailer to reach out far and wide. Hence, humne aapko inside scoop de diya hai of a non-announced film!"

Dinesh Vijan's previous association with Varun Dhawan was the dark thriller, Badlapur (2015). As for Bhediya, it also co-stars Abhishek Banerjee and Deepak Dobriyal. It is directed by Amar Kaushik and releases in 2D and 3D and in Hindi, Tamil and Telugu.