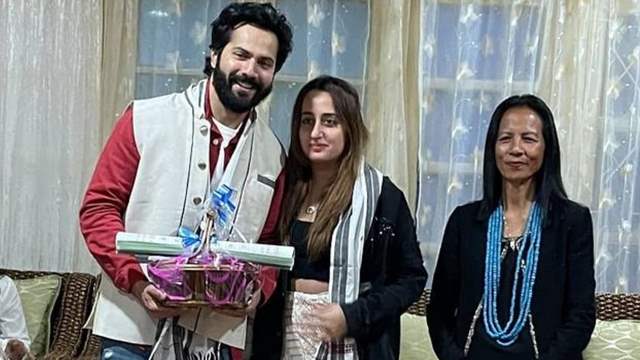 Newly wed Varun Dhawan got back to work soon after his wedding. He tied the knot to longtime girlfriend Natasha Dalal on January 24, 2021 and could not spare for a honeymoon getaway.

Not to worry, as wifey Natasha has joined VD in Arunachal Pradesh, where he is shooting for his upcoming film Bhediya. The couple has been enjoy the beautiful hills and spending quality time together between shoots.

Besides, Varun and Natasha also came forward to donate Rs.1 Lakh as relief assistance to fire victims of Tirap District in Arunachal Pradesh.

The actor’s spokesperson issued an official statement, that reads:

Varun Dhawan and wife Natasha Dalal have donated Rs 1 lakh for the relief of the fire victims of Arunachal Pradesh’s Tirap and Longding districts. The actor who has been shooting in the state for his next - Bhediya handed over the amount to the Lower Subansiri Deputy commissioner Somcha Lowang.

A Twitter handle, Dipro Ziro even posted pictures of the couple being felicitated for their help to the fire victims. VD and Natasha can be seen dressed in traditional attire as they were honoured by the locals for their relief assistance. The other pictures also feature Varun’s co stars Kriti Sanon, Abhishek Banerjee, and others team members.