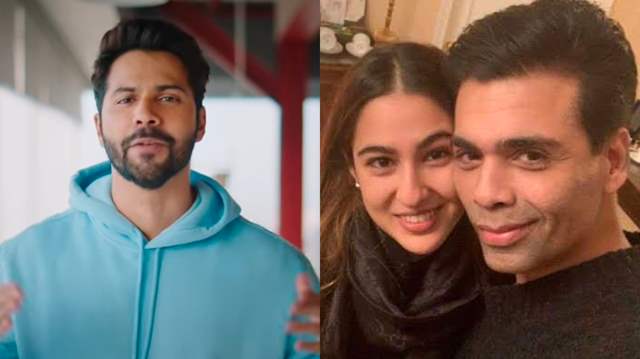 Filmmaker Karan Johar is elated as he just revealed Sara Ali Khan as the lead of the upcoming Amazon Original Movie Ae Watan Mere Watan, which goes on floors this month. The Koffee with Karan host took to his social media to reveal the same. Kjo took to his Instagram account and shared a video of actor Varun Dhawan announcing the same. Karan captioned the video as,

"Thanks for dishing that out @varundvn!! Excited to present #AeWatanMereWatan and stay tuned for @saraalikhan95’s look from the film - out soon! #AeWatanOnPrime, coming soon."

In the video the Judwaa 2 actor can be send sharing the big news in Sara Ali Khan's Namaste style nd it is all times fun. Well in the film, Sara Ali Khan will play a valiant, lion-hearted freedom fighter in a fictional tale set against the backdrop of Quit India Movement in 1942. Karan then shared a cute selfie with Sara and explained how excited he is to have the Love Aaj Kal actor on board. He wrote,

"Extremely excited to have @saraalikhan95 on board with us @dharmaticent to tell a powerful true story!!!! We are supremely proud to have @primevideoin with us on yet another exciting venture…. #AEWATANMEREWATAN"

Needless to say the audiences are super excited to see Sara Ali Khan in a never before seen avatar and her collaboration with Karan Johar.

A thriller drama, inspired by true events, Ae Watan Mere Watan, has been written by Darab Farooqui and Kannan Iyer. A Dharmatic Entertainment Production, the film is being produced by Karan Johar and Apoorva Mehta, with Somen Mishra serving as the co-producer and is being directed by Kannan Iyer.

+ 3
2 months ago there he goes again promoting star kids..apart from these r there no talent in bollywood..his same nepo kids circle, one after other in the movie..now he dont have alia, so others he started :(...gosh just hate this man & the way he talks