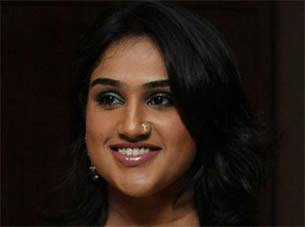 Actress Vanitha Vijayakumar, daughter of late actress Manjula Vijayakumar, has clarified that she is not yet married to choreographer Robert, but plans to wed soon. She says they both are good friends and are currently working towards setting up a production house.

"I clarify that we are not married officially. We are good friends and both of our families are aware of our friendship. We both are planning to start a production venture together. Marriage is on the cards, but will come the official way," Vanitha said in a statement.

"We wish to complement each other with professional success. We will announce our project very soon officially," she added.

Vanitha has already been married twice. Her first marriage was with Tamil actor Akash, with whom she has a son named Srihari, while her second one was with an NRI named Anandraj.

She is officially divorced from her first two husbands.

Vanitha has starred in Tamil films such as "Manickam" and "Chandralekha".