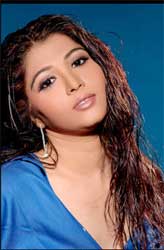 The teaser's of season 2 of Kitani Mohabbat Hai are out and loyal fans of the show are waiting with bathed breathe to have a glimpse of the first promo of the popular imagine show.We hear that the channel and production house are still working on the casting process and have yet not got apt actors for their roles. Apart from the very popular Jodi of Karan Kundar and Kritika Kamra it is only Mohan Kapoor who has been finalized for the show. He will be playing Arjun's father.
The latest is that, "Vaibhavi Behl wife of actor Amit Behl was recently approached to play mother to Arohi. The actress recently made a come back to television after 5 long years with Imagine's Devi, where she essayed the role of Mangali Chachi. However we hear that her youthful grace brought bad luck to her."

A little birdie tell us, " Vaibhavi was almost finalized and had even a photo shoot but the channel didn't find her apt to play Arohi mother as the lady looks very young, thus she was rejected."
When contacted Vaibhavi confirmed the news to tellybuzz and said " After 5 years leap I got back with Shakuntalam's Devi, but that ended soon, after that I was approached to play Arohi's mom in the sequel of Kitani Mohabbat Hai when it looked like all was done, I got a call from the channel that I looked very young for the role and couldn't be taken."

Guess Arohi needs to wait more to meet her new on screen mom.

loveeeee u the most

loveeeee u the most