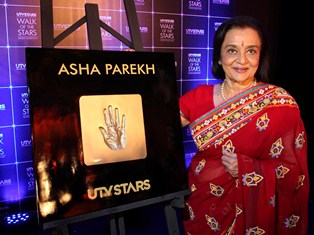 UTV Stars' 'Walk of the Stars' pays an ode to yesteryear's diva, Asha Parekh for her inimitable body of work in the Indian film industry, on Friday 6th December with the launch of her hand impression tile.

The tile was unveiled by the actress herself, in the presence of close friends and celebrities of her era. This tile will be installed at UTV STARS premium property, Walk of the Stars, at the Bandra Bandstand Promenade.

Walk of the Stars has honored numerous on-screen greats from the Indian film industry, joining this illustrious list will be the Padma Shri awardee, Asha Parekh. The fine actress has given super-hits like Kati Patang, Teesri Manzil, Baharon Ke Sapne, Main Tulsi Tere Aangan Ki and many more.

"I am extremely touched by UTV Stars' gesture to have honoured me. I am grateful to everyone who appreciates my contribution to the Indian film industry, which I still hold very close to my heart. With Walk of the Stars, UTV Stars is doing an admirable job by commemorating the lives, times and work of luminary personalities from Bollywood, many of whom I have had the pleasure to work with." said an ecstatic Asha Parekh, after unveiling the tile dedicated to her by UTV Star's Walk of the Stars.

"It's always a pleasure to have personalities of the likes of Ashaji associated with our endeavour of bringing Bollywood closer to its audiences. Ashaji has contributed greatly to the entire film industry throughout her long and bright career. Whether it was her films or herself as a personality, Ashaji has always been greatly admired and has been an icon for millions. We are extremely pleased with the new addition that we have included on to the Walk of the Stars with the hand impression tile of the effervescent beauty, Asha Parekh" said, Bikram Duggal, Director - Marketing, Disney UTV Media Networks.

The iconic superstar's hand impression tile will join those of the other legendary names at Bollywood's official landmark, Walk of the Stars at the Bandra - Bandstand Promenade, the most recent of which was Shashi Kapoor. Walk of the Stars saw the launch of Rajesh Khanna's statue earlier this year and witnessed Yash Chopra and Dev Anand's statues the year before.