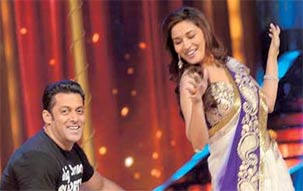 The Etawah district administration in Uttar Pradesh Wednesday banned the entry of mediapersons and camera crews into the Saifai Mahotsav and telecast of the event where film stars Salman Khan and Madhuri Dixit are to perform.

Officials said this was done as performances of these stars were under a contractual obligation and could not be telecast on television channels.

Salman, accompanied by Chief Minister Akhilesh Yadav, took a round of the grounds where the cultural extravaganza is to take place.

Even as the district administration decided to ban the telecast of the event and installed jammers at the venue, the opposition pounced on the state government.

Bharatiya Janata Party state spokesman Vijay Bahadur Pathak also took a dig at the blackout of the cultural event. "Why is the government blacking out the coverage when they are so busy in merry-making," he told IANS.