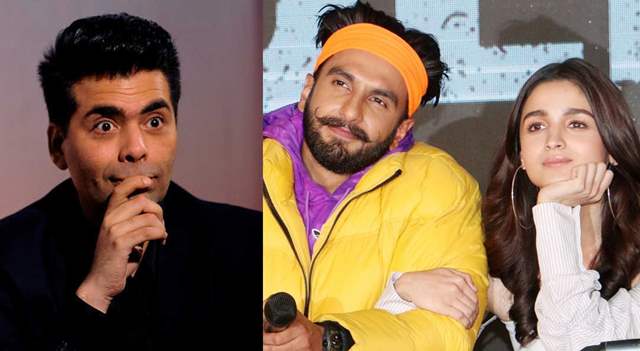 As per fresh reports coming in, Karan Johar who is known for bringing unusual pairing together on-screen (Anusha-Ranbir in Ae  Dil Hai Mushkil, Abhishek-John in Dostana) is all set to direct two of his favourite young stars, Ranveer Singh and Alia Bhatt in a film that is said to be a quirky love story.

The news has been confirmed by the filmmaker's friend who has reportedly also spilled few beans to Spotboye about the film and Karan rapport with Ranveer and Alia.

When Karan was contacted, he refrained from commenting anything about this!

Speaking to the entertainment portal about this new project a close friend of the filmmakers confirmed and revealed,

Yes Karan is directing a film with Ranveer and Alia. Alia is like Karan’s resident heroine. Ussko Karan Kuch bhi karne ko bolega woh karegi (she will do anything Karan asks her to). As for Ranveer, both Deepika and she are very close to Karan. But Ranveer has never been directed by Karan, although he did Simmba which was co-produced by Karan’s Dharma Productions.

Incidentally, Alia and Ranveer have done a series of ads for a travel portal. They co-starred in  Zoya Akhtar’s Gully Boy where Alia had a  minimal role. This time in Karan Johar’s film the pair will have a lot more to do together. Alia is closer to him than she is to her own father. She calls  Karan her second father. Karan needs  no advice on how to make Alia feel special.”

Incidentally, Alia and Karan Johar are so close that she doesn’t make any major professional or personal decisions without consulting him. Alia wants to be in every film of Karan Johar, She never discusses money with him.