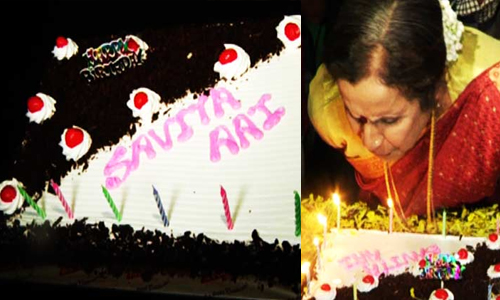 Seasoned actress Usha Nadkarni who has been winning accolades for her stint in Zee TV's  Pavitra Rishta celebrated her birthday on the sets of the show. The noted actress turned 69 and she was overwhelmed with the surprise given by the production team and by the co- actors. The cake cutting happened joyfully on the sets.

As the show is all set to bid adieu, we got in touch with Usha Nadkarni to know how she is feeling after celebrating her last birthday on the sets of Pavitra Rishta.

Says Ushaji, "Five years back when the show started on 12th September, I was going home after my pack up. Our camera man stopped me and asked me to wait for some time, I had no clue about it. Then they brought a cake at midnight and I cut the cake delightfully. I was really overwhelmed with surprise and now after five years when our show is going off air, I again celebrated my birthday on the set. I am feeling really happy that everybody remembered my birthday and wished me for the same."

very very talented actress and famous as Khadus sasuma in Marathi as well as in Hindi TV ..

+ 3
6 years ago Aww Ushaji's statement made me nostalgic too! Five long years, so many memories! I guess everyone will miss PR somewhere. :')
Happy b'day Ushaji!

6 years ago really addicted to pavitra rishta. gonna miss it like crazy!

6 years ago I will miss this show, especially Savita tai.

+ 2
6 years ago Can some one correct the heading of this post...Its giving some other meaning

+ 3
9 years ago COOL!!
would love to go on a helicopter, lucky ppl. anyways m looking forward to the movie!