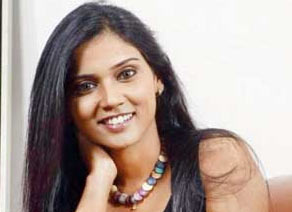 Usha, a Marathi actress, is known for her National Award-winning performance in "Dhag".