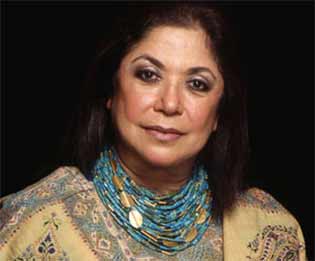 Veteran fashion designer Ritu Kumar, who works with local weavers and artisans across the country regularly, says that by using handloom fabrics unconventionally, people in the design fraternity can give a new lease of life to the craftsmen.

At a talk here at The Lodhi here Monday evening, she took a group of "textile-mad" people through a presentation about the costumes and textiles worn by royals in ancient, medieval and modern India.

When a woman spoke of how her young daughter only prefers figure-hugging saris over a Benarasi or Patola weave, Ritu Kumar said: "We have to make sure to use their (weavers') handloom fabrics in an unconventional way."

She said "figure-hugging saris" have been part of the country's fashion scene since time immemorial - pointing out to some images of the court clothing worn by royalty in ancient India. The photographs are part of her 1999 book "Costumes and Textile of Royal India".

Ritu said that eeven layering, which is a rampant trend on today's fashion ramps, "have a long history".

Taking the audience on a journey of the evolution of court costumes as she "conjectures", she spoke fondly of intricate craftsmanship, overwhelming yards of handwoven fabrics and the man hours it must have taken to shape up most ensembles.

Having been in the fashion industry for over four decades, Ritu says the basics of local craftsmen in the country are very strong, and the techniques aren't easy to learn either.

Hence, she is all for aiding them with the right remuneration, providing them conducive working conditions and in pioneering a concerted collective voice to fight for their rights.

Tulsi Kumar Celebrates Diwali with orphan kids at an NGO