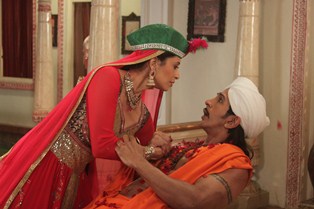 India's one stop destination for Humor - Big Magic's Har Mushkil Ka Hal Akbar Birbal has a special chatpata revelation for viewers this week! With an interesting turn of events Urvashi is compelled to confess her love to Birbal. Viewers are in for a rib-tickling special dual episode this Thursday 21st and 22nd August 2014 at 9pm!

The Royal darbar witnesses a new comic character who claims to be Urvashi's long lost lover separated by death. With a fold of side-splitting events, Urvashi tries her best to retaliate and Emperor Akbar is adamant on brining the lost lovers closer. The witty Birbal who always has a plan up his sleeves congratulates Urvashi and she ends up confessing her true love for him. Tune into Akbar Birbal to find out the comical mystery that lies entertaining reincarnation of Urvashi!

Featuring some of the best in comedy and television entertainment, Har Mushkil Ka Hal - Akbar Birbal is a fresh, comic take on the much-loved childhood folktales. The first in the genre of Historical Comedy, Akbar Birbal has captured the audience's imagination with its delightful storyline and stellar cast featuring Kiku Sharda, Delnaaz Irani, Vishal Kotian and Kishwar Merchantt. Aired on Big Magic at 9pm, the show has received a lot of adulation from fans and critics alike. Over social media, there has been an outpouring of praise for the well-crafted script, the actors' quick comic timing and their unique chemistry.