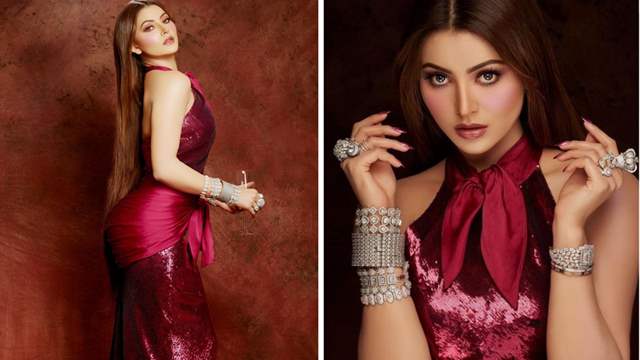 Recently, several Bollywood actors attended the night of Filmfare Awards and graced the red carpet in their stylish best avatars.

Urvashi Rautela too graced the night in a shimmering crimson shade halter neck fishtail gown, with satin wraparounds on her neckline and waist that looked just magnificent. Her award night ensemble was completed with jewellery like bracelets and rings added up with a clutch that made the grand total of the ensemble go beyond a whopping Rs 35 Lakhs.

The look that Urvashi Rautela carried was styled by the stylist Tushar Kapoor who shared details about the actress’ red carpet outfit. In a statement shared by her team, the stylist says:

Styling someone like Bollywood’s young superstar, Urvashi Rautela, for something as big as Filmfare I find it surreal, exciting, and scary. To be honest such a tremendous response was absolutely unexpected. Urvashi Rautela wore a crimson gown by Monisha Jaising for Filmfare, the gown costs Rs 70K, and the jewelry itself costs around Rs 34 Lakh. The clutch that completed the look is of RS 30K.

On the work front, Urvashi Rautela will be seen in the cop-action-thriller web series “Inspector Avinash” alongside Randeep Hooda.

She will be seen playing the role of a microbiologist and an IITian in her big-budget sci-fi Tamil debut, talking about the south debut, the actress will also be seen in “Black Rose” a bilingual thriller, and the Hindi remake of “Thirutu Payale 2”.

1 months ago 35 lakhs still so hideous