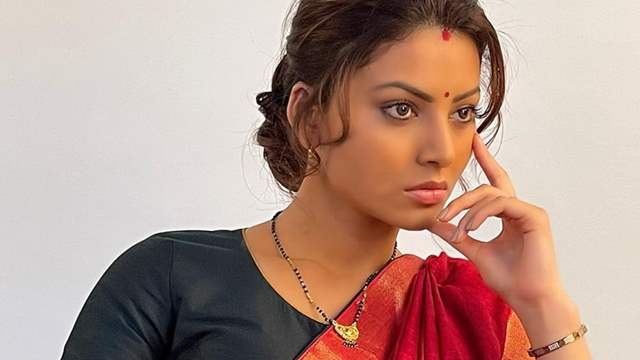 Urvashi Rautela has dropped a new picture on the Internet, that is going the distance.

She recently posted a picture of herself on Instagram that is just breaking the internet. In the picture Urvashi has draped a simple saree with a black blouse that goes along with the color of the saree, but what is catching the eyes in this picture is a mangal sutra and sindoor.

The actress has captioned the picture as, “I have a bad habit that not many have these days. I keep my word”.

Explaining the meaning of her cryptic caption, she stated in a statement shared by her team,

“In line with philosophical punch dialogues, there is another category of punch dialogues that are immensely entertaining. These are the lines that drip with sarcasm and swag, belittling the bad guy. And Vijay’s film Bairavaa has one such line. ‘Innaiku neraya peru kita illadha keta pazhakkam onnu enkita iruku.’ Sonna vaaka kapatharadhu” which means ‘I have a bad habit that not many have these days. I keep my word.’

On the work front, Urvashi Rautela will be sharing screen space with Randeep Hooda for the upcoming Jio studios’ web series “Inspector Avinash”. The actress will also be making her Tamil debut in a big-budget multilingual sci-fi film, wherein she will be playing the role of a microbiologist and an IITian.

Apart from this, Urvashi will be starring in “Black Rose” a bilingual thriller, and a Hindi remake of “Thirutu Payale 2”.