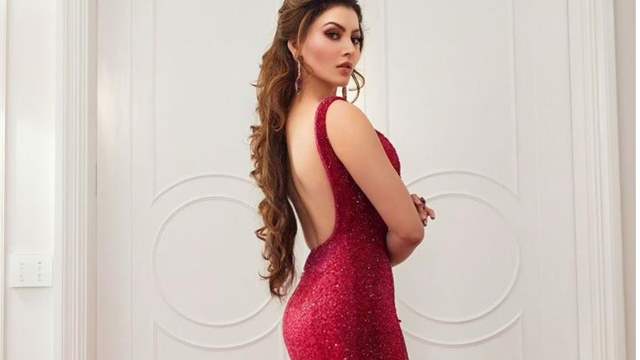 Former Miss Universe and Bollywood Actress Urvashi Rautela is one of the top-rated actresses in Bollywood who has won millions of hearts with her mindblowing performance. Debuting from the film "Singh Sahab the Great" to working in bold film like "Virgin Bhanupriya" Urvashi has proved that nothing is impossible for her.

This time again Urvashi has surprised her fans, as she made a huge announcement regarding her upcoming project, which she will be doing soon. She will be stepping into the new avatar of the Legendary actress Madhubala's evergreen song "Ek Ladki Bheegi Bhaagi Si" which is a dream come true for the young actress.

Urvashi Rautela shared in a statement shared by his team, "It is truly a culmination of one of my dreams, stepping into the legendary and beauty icon Madhubala Ji shoes and that too for "Ek Ladki Bheegi Bhaagi Si" which is a classic cult song altogether and giving my own vocals along with Kishore Kumar Sir's original voice. I mean this year truly has started on a very bang on note for me. Madhubala Ji was an icon for Indian cinema who mesmerised audiences not only with her exquisite beauty but also with her ability to renders some of the deepest emotions on-screen and her remarkable acting skills and timeless beauty she created a mark for herself and as remembered till date, and we are also celebrating 60th Golden years of "Chalti ka Naam Gaadi" which was released on 1958, so this is a remake of a song "Ek Ladki Bheegi Bhaagi Si", the most iconic song which is created by Viral Motani, composed by R.D Burman Sir and sung by Kishore Kumar Sir so I am more than elated to give my vocals to this song and am so happy and excited.

On the work front, Urvashi Rautela was recently seen in a music video titled ‘Woh Chaand Kaha Se Laogi’ opposite television actor Mohsin Khan. Apart from that, she also has another music video titled ‘Teri Load Ve’. In an interview, she admitted that she enjoyed doing music videos. Urvashi was last seen in ‘Virgin Bhanupriya’.

Also, She will be seen in ‘Black Rose’, which is said to be a bilingual thriller. The team reportedly shot the project once the lockdown curbs were lifted. Recently the first look of Urvashi Rautela's Tamil remake film "Thiruttu Payale 2"  created a huge buzz. The actress will be also seen in an international project opposite Egyptian superstar Mohamed Ramadan, the announcement for the project will be made soon.