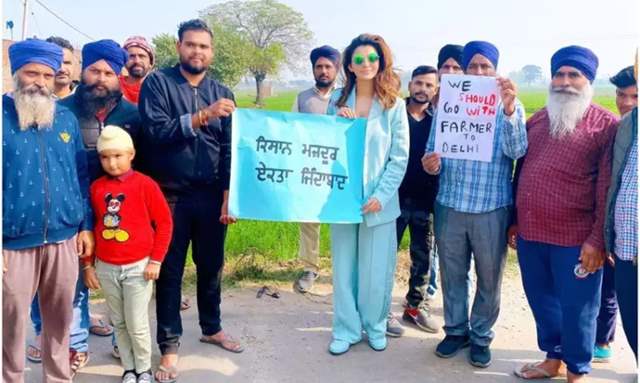 In the wake of farmers’ protests against the Centre's farm laws, many celebrities have expressed their stand over the on-going issue. Several Bollywood celebrities like Diljit Dosanjh, Riteish Deshmukh, Richa Chadha, Hansal Mehta, Anubhav Sinha, Sonam Kapoor and husband Anand Ahuja, Sonu Sood, Taapsee Pannu, and many more are gradually coming out in support of the farmers and their concerns.

Now, actor Urvashi Rautela joined the group as she shared her views with a strong note.

The actor's note read, “Without farmers, we wouldn’t have access to food and other basic necessities. Take a moment to really appreciate this profession and all the hard work and dedication the farm life requires”

“Farmers are the backbone of our nation. They need our respect not Sympathy and we shall give it,” she added.

Meanwhile, Urvashi was in Chandigarh and went a step ahead and supported the farmers by standing alongside them in the protest against the center’s farm laws, reported Times of India.

The actress was even seen standing alongside protesters holding placards which read - We should go with farmer to Delhi.

The Times of India report also quoted a source mentioning, “Urvashi was in Chandigarh for some work. From there, she was heading to the airport to take a flight to Haridwar to attend a wedding ceremony of a family member. However, due to the band and the protests, she couldn’t reach the airport on time and missed the flight.”

The source added that instead of fuming, Urvashi, who’s been strongly supporting the farmers started walking to the airport, and on the way, she spotted farmers protesting for their rights.

Urvashi even interacted with the farmers asking them about their views and issues they are facing over the new agricultural laws.