Mumbai, Feb 4 (IANS) She is an Aquarian, but doesn't know swimming. But Urmila Matondkar took the plunge on her 35th birthday by gifting herself an underwater holiday in Koh Samui, Thailand, and says it is like being in paradise.

'Being an Aquarian I couldn't think of a better birthday than this,' Urmila told IANS over phone from the exotic location. 'I've been virtually living underwater for the past few days. That's where I'm on my birthday. Believe me, it's like being in paradise,' said Urmila, who turned 35 Wednesday.

'Even my instructor is zapped by my enthusiasm, specially since I can't swim. I have snorkeled in Goa, but the water in India isn't that clean. And I was rather apprehensive to go underwater... but what better time than your birthday to let the mind conquer physical fears?'

For years Urmila has been planning to learn swimming.

'Would you believe I'm an Aquarian and I've done all these supposedly sizzling water-borne scenes. But I didn't know how to swim! I still don't. I can't swim to save my life. Once during a shooting in mid-ocean, the boat collapsed and I nearly drowned. That's when I decided I have to swim.'

'Though I haven't taken proper swimming lessons and you won't catch me in a swimming pool, I decided to take the plunge anyway. You know me. Once I decide to do something, I'll do it. For now, the only man in my life is my scuba diving instructor.'

The actress, who was last seen in 'Karzzzz', says usually she goes underground on her birthday.

'Each year I go underground for my birthday. This year I went underwater. Seriously, I'm not a birthday person. For years and years my father has made charitable donations on my birthday. To me that means more than any celebration.'

'Friends wonder why I'm so thanda (unenthusiastic) about my birthday. But I'm excited about my birthday. I just can't go around skipping and dancing about it. Though my screen persona is of an aggressive person, I'm basically shy. I find it hard to show my excitement.'

The actress was seen in hits like 'Rangeela', 'Kaun', 'Jungle' and 'Bhoot'. 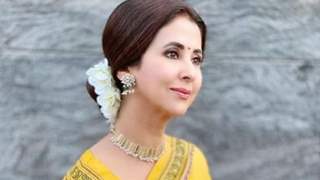