View Profile
Rumor has it that director Ayan Mukerji, who debuted with his film Wake Up Sid, leaving many stunned with his work, is planning for a second film and for that film he expressed the desire to cast Ranbir Kapoor opposite ex flame, Deepika Padukone. 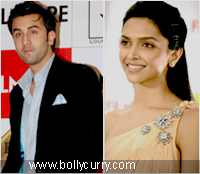 But the young lad took no hesitations in stepping back and straight out, refusing the director due to the fact that Deepika was going to be in it.
Ranbir and Deepika had called it quits long back but things turned quite sour after Deepika's outrageous remarks and catty comments directed towards him, distancing them even further. Though now Ranbir has got the chance, he stuck the venom right back with his refusal in working with Deeps.
This has definitely become quite a tough task for Ayaan who has become a great friend of Ranbir's during the making of Wake Up Sid. But the director has gone on to say that the actress will only be decided once the script of the movie is complete.
However one thing is for sure, there are high chances of Ranbir Kapoor being the male lead in Mukerji's film yet again. Only time remains to tell who will be the beauty that will get to share screen space with him.
Unprofessional of Mr. Casanova Kapoor? We'll leave the decision up to you.