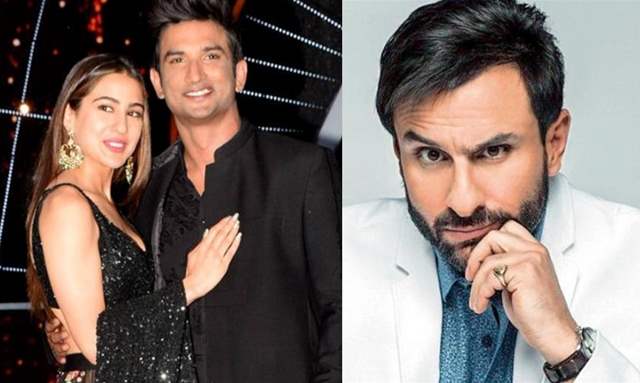 Sushant Singh Rajput, 34, hanged himself at his Bandra house in Mumbai. Reportedly, the actor was battling with depression for the last six months and was taking anti-depressant pills as well. His close friends and house help also inform that the actor was disturbed for a long time.

The unfortunate and untimely demise of the talented actor has shattered his friends, family and fans all across the globe. The entire industry, his colleagues, family, friends and fans are heartbroken over Sushant’s shocking demise and have been pouring in their heartfelt wishes.

Reacting to Bollywood’s sudden outburst of love towards Sushant, Saif Ali Khan tells Times of India in an interview: “There are so many people who’ve made comments so quickly. And it just seems to me that people are somewhere gaining some mileage from this poor fellow’s tragedy, you know, whether it’s to show compassion or to show interest or to show some political stance. So many people are talking rubbish in this nonstop kind of barrage on social media and it’s just embarrassing, really, I think.”

The Tanhaji actor says that a day of silence would be more appropriate than making comments on social media. “Out of respect for him, for Sushant’s tragedy, maybe a day of silence or introspection would be a little more becoming than this outpouring of love – an outpouring of love from people who obviously didn’t care about him and people who famously don’t care about anybody else,” he said.

Saif calls the Bollywood industry a ‘cutthroat line of work’ and asserts that anyone pretending to care is ‘ultimate hypocrisy.’ “I mean, we don’t care about anybody. You know, it’s a very cutthroat line of work. But to pretend that you do care is like the ultimate hypocrisy and I think that’s an insult to the dead, you know, it’s an insult to the soul that’s gone,” says the actor.

“We live in an age where people write 10 lines for you on Twitter and will walk past you on the street - won’t even touch you or shake your hand. You know, you get wished for your birthday, but people don’t actually call you. There’s no contact,” he added.

However, Saif does not completely agree with this. “People are failing people constantly. Everyone talking about him, even those saying who failed you or didn’t fail you is, I think, somewhat exploiting his name. To take any stand at the moment, apart from just sorrow, and just saying that I’m really sad that he had no way out except this - any other comment is somewhere manipulating the situation, I feel. You have come across this as an opportunity to take a shot at somebody, and you’re taking a shot,” he said.

Talking about Bollywood camps, Saif says: “These are the wrong comments to make now. I mean, you can say, listen, it’s just really bad, what happened. It’s really sad that this is the only way he could see out. But to blame anybody or to you know, draw these camps out, this is pathetic. I think it’s a function of lockdown plus social media. And it’s sad that film people can’t think beyond films. We will all assume that this terrible thing happened to him because of his films. There is more to life. Maybe he was upset about other things in his life. Maybe it was a personal reason. Maybe it’s nothing to do with films. If you can’t see beyond that, you will put everything on that – the movies you do.”

Saif Ali Khan’s daughter and actress Sara Ali Khan made her Bollywood debut opposite Sushant in the film Kedarnath. Sara and Sushant shared a good bond and talking about Sara’s reaction after the latter’s untimely demise, Saif reveals that the actress was very upset.

Revealing that Sara was  ‘very, very, very upset’ by the news, Saif said, “She liked him very much. She was quite impressed with certain aspects of his personality. She told me he was very intelligent, that he could discuss, you know, Jean-Paul Sartre and he could discuss various aspects of philosophy and engineering and that he had learned how to shoot with a bow and arrow left-handed, and he was very fit as well as very hard-working, and a good actor.”

ishan2003 1 months ago Saif define class...very few people can be like him

"Rhea is Being Subjected to a Bizarre & Dangerous Media ...
11 minutes ago