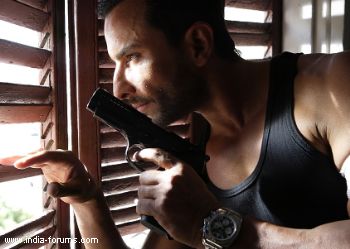 "Agent Vinod", an action spy thriller has got a U/A certificate from the censor board after a screening Wednesday and Saif Ali Khan is happy with this.

Directed by Sriram Raghavan, the film has Saif in the title role and is releasing March 23. Kareena Kapoor plays the female lead in it.

"Our film has a lot of action but we have worked on keeping it more realistic and less violent. And after censor board's screening, we have got a U/A certificate and I am very happy," said the actor who is in the city for the film's promotion.

"We wanted more people and even the kids to watch the film. And my son Ibrahim is also very excited and told me that he and his friends want to watch 'Agent Vinod'," added the actor.