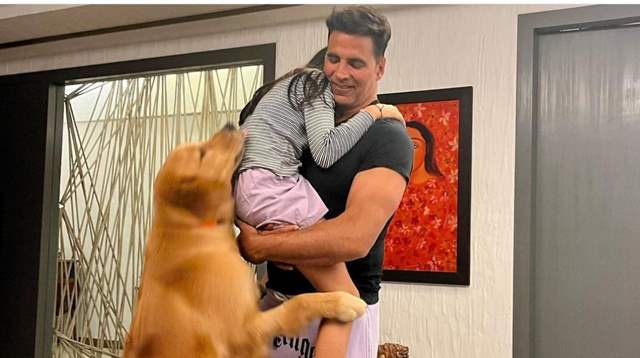 Twinkle Khanna is a frequent social media user with a large following. The writer recently shared a nice photo of her husband Akshay Kumar and their daughter Nitara, as well as their pet dog, on her Instagram account. The image will undoubtedly brighten your day.

The Atrangi Re actor is seen in the photo holding his daughter Nitara while she hugs him, and their furry friend is seen cuddling them both. In a black t-shirt and purple trousers, the 'Khiladi' actor looks as gorgeous as ever. White shoes complemented the actor's overall casual outfit.

"Time for a group hug? Few things beat a dog with his wagging tail and the joy with which he leaps on you when you return home. Don’t you wish the humans we lived with greeted us with the same enthusiasm as well?"

While fans bombarded the post with a lot of love and heart emojis for the actor and their group hug.

Meanwhile, on the professional front, Akshay has recently made news for endorsing a pan masala brand. Even after he dropped out of the contract and pledged to put the money he earned from the endorsement to good use, the Bachchhan Paandey actor has faced wrath on social media.

On the work front, the Bhool Bhulaiya actor has an interesting line-up of films that include ‘Raksha Bandhan’, ‘Prithviraj’, ‘Selfiee’, ‘OMG 2’, ‘Mission Cindrella’, ‘Ram Setu’ and others in his pipeline.