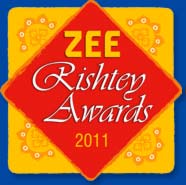 A procession of TV stars led by an elephant, an aerial act and some colourful, energetic performances left the audience in awe at the Zee Rishtey Awards here.

The Andheri Sports Complex Saturday night was full of TV buffs, who came dressed in best of their fineries to watch their favourite small screen stars live.

The stars made a unique entry via a procession - the cast of each show entered separately atop either a car or rickshaw and waved at their fans.

Hosted by Mona Singh, the awards ceremony also saw an aerial act by former participants and winners of the channel's flagship dance reality show 'Dance India Dance' like Shakti, a grand skit by the cast of 'Shobha Somnath Ki' and a performance on a medley of songs by the young actors of different shows.

A one minute silence was observed by everyone in remembrance of the victims of the 26/11 Mumbai terror attack.

The show was also attended by Urmila Matondkar, Shiney Ahuja, Sayali Bhagat and singer Bappi Lahiri, who enthralled the audience with a stanza of his latest chartbuster 'Ooh la la' from 'The Dirty Picture'.

The awards will be aired on Zee TV at a later date and winners will be revealed than only.

10 years ago only and i mean only waiting to see karan and abha's performances...they have the best chemistry on screen and off...i don't see staring off into space as being romantic so for our best jodi couple karan and abha all the way...!!!!!!!!!!!!!!!!!

10 years ago Sorry but when is that later date! Can't wait to watch! Love the Rishtey awards! 10 years ago waiting for lovely and karthik performance.

+ 2
10 years ago waiting for our lovely avina's performance only.

10 years ago Avinash and rubina is going to rock the stage ya...

They are the best jodi for ever...