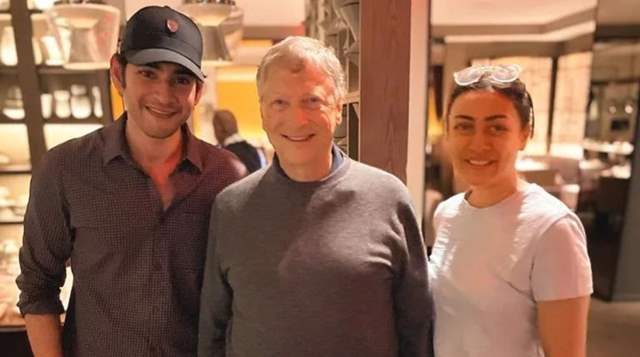 Actor-producer Mahesh Babu, his wife Namrata, and their children Gautam and Sitara have been travelling extensively on a vacay. The family is traveling around the world, from Europe to New York, and posting pictures on social media, which are seriously inspiring wanderlust.

The actor recently uploaded a picture with Bill Gates from their trip to New York, and it quickly went viral online.

Mahesh Babu posted a photo of himself with Bill Gates on his Instagram account. The Microsoft co-founder is clad in a grey sweater and off-white pants while the Spyder actor and his wife can be seen sporting casual attire.

The trio is all smiles as they pose for a happy picture together. Sharing the photo,Mahesh Babu wrote,

"Had the pleasure of meeting Mr. @thisisbillgates! One of the greatest visionaries this world has seen... and yet the most humble! Truly an inspiration!!”

On the work front, Mahesh Babu is teaming up with Trivikram Srinivas for his next, tentatively titled SSMB28. The film marks the second time collaboration between Mahesh Babu and Trivikram. Pooja Hegde is the female lead in Mahesh Babu starrer SSMB28.

Mahesh also has a film with SS Rajamouli, which is currently under discussion. While it is reported that the film could be based on African Jungle Adventure, however, the project is still under discussion.