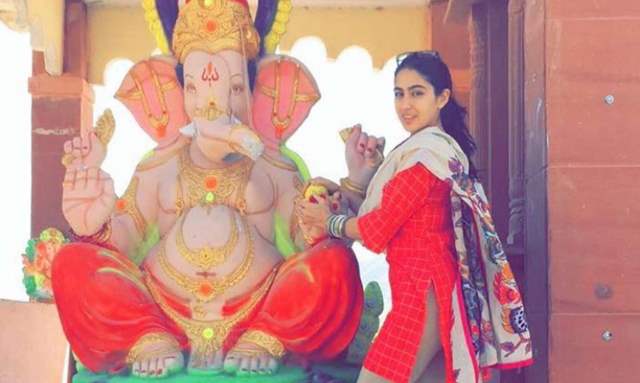 Sara Ali Khan is an avid social media user and likes to keep her followers updated with her everyday life events. Right from sharing her childhood pictures to posting pictures with her family, she likes to be an open book for her fans over the web. Recently, she shared a picture posing with a Ganpati idol on the occasion of Ganesh Chaturthi, wishing her loved one's goodwill and positivity. However, her gentle act did not seem to go down well with some of her followers and she was brutally trolled for celebrating a Hindu festival despite being Muslim. Many mean comments started pouring in over her post and she was excoriated for her festive spirit.

Also Read: Sara’s Throwback Picture will Shock you, but Caption will Leave You in Splits!

While Sara chose to not pay any heed to these trivial comments, a close friend of the Khan family came to her rescue and broke the silence over these ruthless online trolls.

“Sara’s family is the portrait of secularism. Her paternal grandmother, Sharmila Tagore, is a Hindu, who was very happily married to a Muslim man. All the festivals are celebrated with equal enthusiasm in their household. Saif is married to Kareena, who is Hindu. He attends religious functions at home and his sasural (in-laws place),” quoted a family friend to Deccan Chronicle.

“Saif and Amrita Singh’s children have been brought up to believe in whatever God they want to believe in. Why try to slot her into prejudiced corners,” the friend further states.

Besides, actress and activist Renuka Shahane had taken a stand against these trolls and trashed them saying, “Trolls need to get real jobs. Any person in our country, celebrity or otherwise, has a right to celebrate any festival they want. One shouldn’t be narrow-minded and petty about it.”