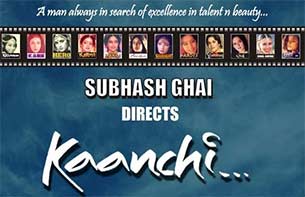 Trendspotters.tv, an online digital channel, has entered into an alliance with film production banner Mukta Arts as their online channel partner for Subhash Ghai's directorial "Kaanchi".

This will be its first such film association. As part of the deal, the digital channel shall be associated with the film for special promotional activities during March and April.

"I have been a trendsetter myself and I am more than keen to be associated with Trendspotters.tv," Ghai said in a statement.

Trendspotters.tv will showcase behind the scenes stories of the film, and it will also webcast a pre-release interview of Ghai along with the star cast.

"At Trendspotters.tv, we are keen on engaging our audience with fresh developments in the world of entertainment. Bollywood being a much loved genre of films among our target audience, collaboration with the production house that has given some of the biggest hits of the industry is indeed a significant one," said Kunal Kishore Sinha, founder, www.trendspotters.tv.

Featuring Kartik Aaryan Tiwari from "Pyaar Ka Punchnama" fame along with newcomer Mishti in the lead, the film is scheduled to hit the cinemas April 25.