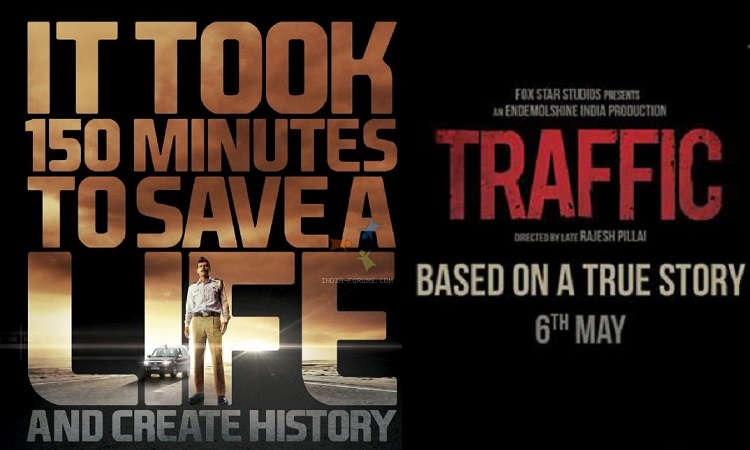 150 minutes, 1 life and few people trying their best to save one girl... This is what the whole story of 'Traffic' is all about.

Four lives intertwined with each other but the only goal sums up is to save the life of one young who is battling for her life.

This emotional thriller is based on a true story of a road trip from Mumbai to Pune. The plot showcases a day in the lives of a few people who are at the same traffic junction in Mumbai city at the beginning of the day, and how their fates get entangled because of an incident.

The film tugs at our hearts as a police car races to deliver a live heart (organ) from Mumbai to Pune just in time to save the life of a 13 year old girl.

Manoj Bajpayee: This versatile actor has time and again proved his capabilities of flawlessly getting into the skin of his character. He has the power to captivate the audience with his flawless performance and that's exactly what he did in 'Traffic' as well wherein he is seen playing the role of a traffic police constable.

Jimmy Shergill is playing the role of City Police Commissioner (Mumbai). With his powerful performance the actor has hit the right chord to amaze the audience even in an authoritarian role.

Divya Dutta is playing the mother of the 13 year old girl who is battling for her life. With her realistic performance she has yet again managed to gather applauds.

Vishal Singh had a very small screen time but even in that he pulled up his character quiet well and left his mark. He is seen playing the role of a trainee journalist.

Sachin Khedekar and Kitu Gidwani are playing Vishal Singh's parents in the film. These flawless actors have portrayed their emotions so well that you get carried away and become a part of the story.

All the events in the film have been placed so well that even after innumerable events happening at the same time, it doesn't confuse the audience. Throughout the movie there are constant turn of events which keeps the audience intrigued.

However, ahead of the climax, predictable and unnecessary tension has been created which might bug the audience.

But, all the elements in the film have been comprised so well that you will find minimal loose ends and this adds the cherry on the cake.

The film ends with a very beautiful message vocalized by Manoj Bajpayee which might leave you with a sweet sour smile.

Owing to the vacation time, 'Traffic' becomes a must watch for the whole family. Not only for its realistic content but also for the strong message that has been portrayed so well.

(Disclaimer: The above review is the opinion from one person's point of view and the views are bound to differ from person to person)

movierecipe 4 years ago I was so looking forward to Traffic. But the movie turned out to be a disappointment. Positioning it as thriller didn't work well as the movie s quite slow and there are only a couple 'thrilling' moments.
~ More at MovieRecipe