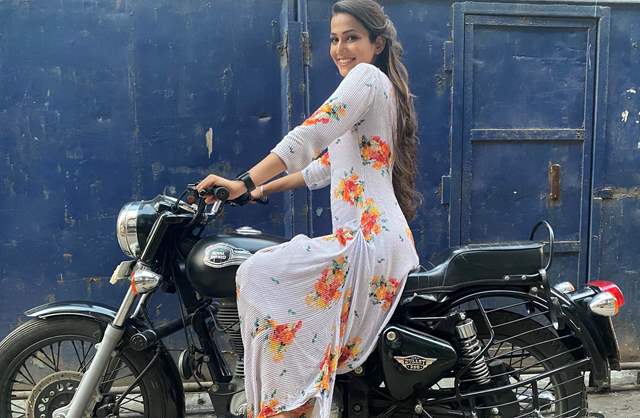 Zee TV has always strived to entertain its viewers with various stories that resonate with the Indian middle class and keep them intrigued all along. Unveiling yet another endearing tale of two young souls, Zee TV is set to introduce Teri Meri Ikk Jindri. Set against the backdrop of Amritsar, the show traces the love story and journey of Mahi and Jogi, who despite their starkly different personalities and outlook towards life, choose to walk together on the common path of love. The show features television actress Amandeep Sidhu essaying the role of Mahi opposite popular television actor Adhvik Mahajan, who will be playing the role of Jogi.

While both the actors have been working hard to embrace all the elements of their characters, Amandeep in particular is leaving no stone unturned for the show. In order to bring out the true characteristics of Mahi in Teri Meri Ikk Jindri, the actress had to learn how to ride a heavy bike and we have to say that Mahi aced this challenge. She had to learn how to ride a bike from scratch and in a matter of just five days, Amandeep was a pro. In fact, she fell so much in love with bike riding that she has been taking a round or two on the set during her free time since the time she learned how to ride.

However, as easy as it might sound, Amandeep did face some challenges at first. Sharing her experience, the Teri Meri Ikk Jindri actress said, “When the production team told me that I would have to ride a bike, I thought they were actually kidding. We were to shoot for the Teri Meri Ikk Jindri promo in five days and I thought to learn to ride a bike in that much time and that too a heavy bike like a Bullet was nearly impossible. In fact, the thought of trying to ride such a heavy vehicle was intimidating, more so because I had no idea of the clutch and brake. I was really scared of injuring myself. However, I did not want to give up before trying my hand at riding it once. On the first day, I could barely start the bike and almost lost hope, but my team kept me motivated and by the third day, I could ride the bike with absolute confidence. It was because of their belief in me that I have been able to do this!"

Amandeep further added, "The feeling of riding such a powerful machine is indeed thrilling. The entire practice on the Teri Meri Ikk Jindri set and outside was managed with great precautions and my entire team kept guiding me at every step. Touchwood, no accidents took place and I enjoy riding the bike every day now. I feel Mahi has helped me overcome great fear and experience the joy of bike rides even more.”

While Amandeep enjoys riding bikes, find out what happens when two people with extreme opposite perspectives and ideologies towards life fall in love with each other.