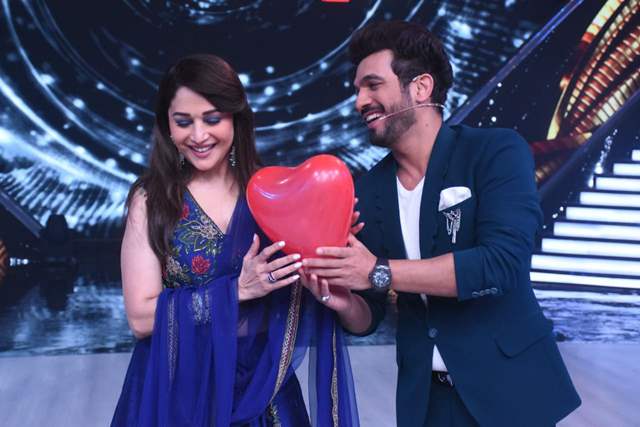 Every contestant on COLORS’ 'Jhalak Dikhhla Jaa 10' has their sights set on the much desired ‘Golden Chair’, which will bring them a step closer to the finale. In this weekend’s episode, ace choreographers turned actors Salman Yusuff Khan and Punit Pathak will be seen gracing the show as guest judges and challenging the contestants by swapping their choreographers. For the 'Adla-Badli' special weekend, Rubina Dilaik is paired with Pratik, Nishant Bhat teams up with Romsha, Sriti Jha will tag along with Tarun, Gashmeer Mahajani will perform with Shweta Sharda, Vaishnavi will assist Paras Kalnawat, the tigress Nia Sharma will dance with Vivek and tiny tots Gunjan Sinha and Tejas will be seen alongside Akash, Sanam will collaborate with Amruta Khanvilkar, Niti Taylor will join Sagar and Faisal Shaikh will be seen dancing to Anuradha’s choreography.

As the countdown to the finale begins, this weekend promises new twists and some fabulous performances making it a must-watch. From stupefying aerial acts to mesmerizing Indian folk dance forms, this weekend's episodes are packed with non-stop entertainment. One such act that stands out is that of Rubina Dilaik, who continues to perform despite her fire-lit prop 'Matka' falling off the stage in the middle of her performance. Impressed by her presence of mind, the judges heap praises on her performance.  Sriti Jha goes through a similar predicament as she misses the hook of the aerial rope in the middle of her performance. Overwhelmed with emotions on wrapping the challenging performance, she requests Salman to show her how he aces his dance moves in an aerial act. Salman happily shows her the tricks of the trade and stuns everyone with his finesse. Madhuri could not resist appreciating Salman’s act with her booming signature whistle. Reeling on the adulation, Salman requests the judges to sign his winner’s trophy and reveals that the weekend’s episode marked his 10th anniversary of winning ‘Jhalak Dikhhla Jaa’.

The champion juniors Gunjan Sinha and Tejas also impressed the viewers while performing to ‘Maar Daala’ in hip-hop style with their choreographer Akash Thapa. The amazing performance makes Madhuri enact her iconic dance to this song.  The fun continues as Punit and Salman perform with Paras Kalnawat and judge Nora Fatehi, and Karan Johar sings for them in his distinctive style. Raising the heat, judge Nora and guest judges Salman and Punit set the stage on fire with their killer moves on the song ‘Garmi’. Amidst all the entertainment, the sword of elimination hangs over the contestants’ heads, find out who bids adieu to the Jhalak stage this weekend!

2 months ago Again, Gunjan-Tejas doing the same kind of dance & dancing in their comfort zone. No diversity in their dance.