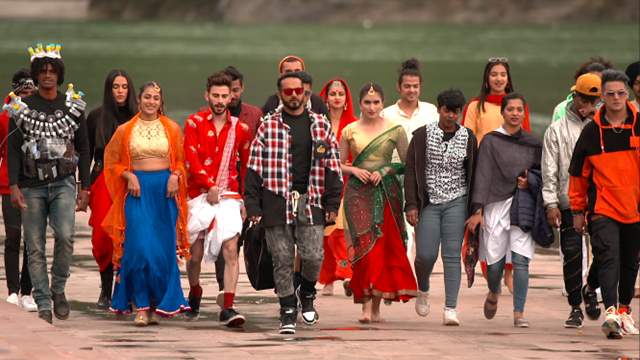 Four weeks into the journey and the contestants have started dividing themselves into groups, made stronger bonds and are hands-on with the game. While the celebrity leaders are constantly asking the contestants to understand how every bit of the game is turning out to be, they are finally getting a hang of how collaborative efforts can work wonders in the vote out pit. A lot of expectations will be broken, a lot of friendships will be affected during this journey, and right now, it’s just the start. This week, the journey of Roadies Revolution will witness the second vote out of the season along with the portrayal of one of the most impactful task in the beautiful city, Rishikesh.

This week, the money won from the task will go to Ganga Seva Mission (Mahila Sangathan) – a group of women who work together to keep the ghats of Rishikesh clean. Moving in the episode, Rannvijay introduces the task for this week named “EDM” (Entertainment, Dance and Message), which is all about a stage performance ticking off the parameters of EDM, at the Triveni Ghat, in front of the local audience. Celebrity leaders, Neha and Raftaar will get everyone emotional through their performances on the grave issues faced by women and gender discrimination. Tune-in to the episode to know all about it.

The second vote outs of the season will not just be based on the maximum number of votes, but will have the celebrity leaders involved as well. While the non-immune team has some immunities to win from the last week’s social deed task, the danger of elimination is hovering over everyone’s heads. Will the team Delhi knock off someone from the team Pune, or will be the other way round? What deals would be made in order for survival? Who will have to go back home in from this glorious journey?