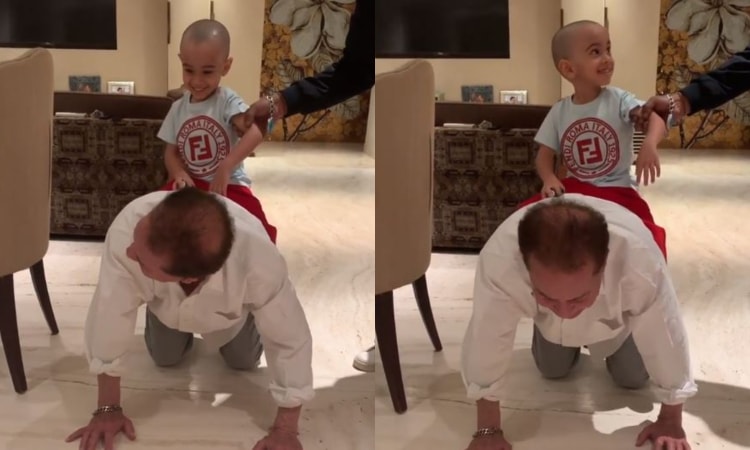 It is not unknown that Salman Khan shares a great bond with sister Arpita Khan Sharma's son Ahil Sharma and is often seen spending time with him. Not to forget, he keeps sharing videos of him having a fabulous time with his nephew.

Now once again, we have got our hands on an aww-dorable video of Ahil but this time it is not with Salman but is with his nana Salim Khan. In the video shared by Arpita, Ahil can be seen playing with her father Salim Khan, who is enjoying as he gives Ahil a ride on his back. In fact, Arpita posted a sweet caption for the video and wrote, "So amazing to see my dad at 83 do things with Ahil which he must have done with me & I can't remember.' She added, 'Memories forever Love you Dad/ Nana."

Isn't it just too cute to see both of them bonding? Well, it will certainly remind you of your own childhood!

For the unversed, Arpita is the daughter of Salim Khan and is the youngest among the Khan siblings, Salman, Arbaaz, Alvira and Sohail Khan. She married her long term boyfriend Aayush Sharma in the year 2014 and they became parents to their little munchkin Ahil in 2016. Aayush, too, joined film recently and made his debut opposite newbie Warina Hussain in LoveYatri, although the film failed to create a buzz amongst the audience and the critics.