View Profile
After having the crow as the symbol of evil in RGV's Phoonk, this time it is going to be the DOLL terrorizing the audiences in Phoonk2. Ramdas Padhey internationally acclaimed ventriloquist, who has performed his widely acclaimed ventriloquial acts in India and abroad has designed the DOLL for Ram Gopal Varma's PHOONK2. Ramdas Padhey has taken India's name on a Global level in Puppetry and Ventriloquism. 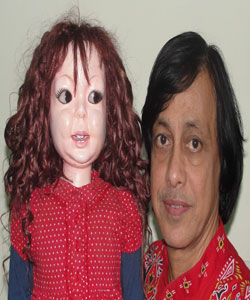 Speaking more on this, Ramdas Padhye said "It was a great experience working on the Doll for Ram Gopal Varma's film. When I got a call from the Ram Gopal Varma's office for this film I was very excited. Firstly, because I have made puppets and dolls for numerous comedy films and shows, this was one of the infrequent chances I was getting to do it for a horror film."
A sequel to the blockbuster hit film 'Phoonk'. Phoonk 2 is a horror film and one of the scariest films ever to be made in Bollywood. Writer Milind Gadagkar's directorial debut film PHOONK 2 is ready and slated for release on 16th of April, 2010. The film is presented by Ram Gopal Varma. The film stars Sudeep, Amruta Khanvilkar, Ashwini Kalsekar, Ahsaas Channa, Neeru Bajwa, Amit sadh and Rishabh Jain apart from others.