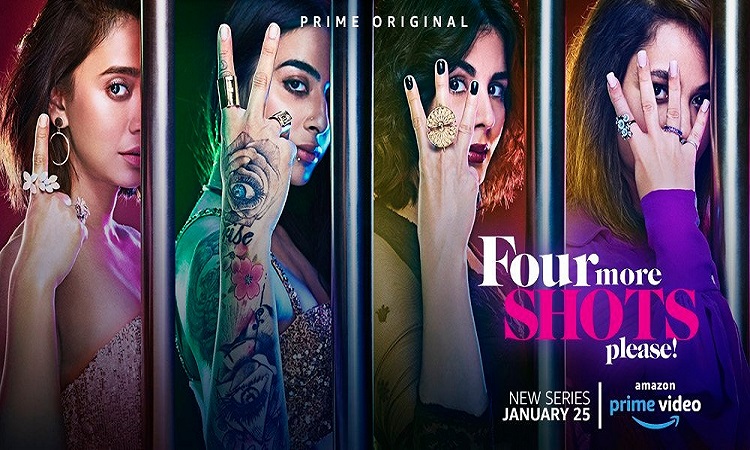 Ever since the trailer released of  Amazon Prime Original's Four More Shots Please!, the content has been creating immense buzz across all the quarters.
Amazon Prime Video's upcoming Prime Original, Four More Shots Please!, is a true-to-life portrayal of the everyday highs & lows of the urban Indian woman; available for Prime members on 25th January 2019.
The high spirited colorful series has been shot at various locations viz. 145 Kala Ghoda, South Bombay, and Goa in order to get the sync with the vibe of the series.
The new Amazon Prime Original casts a spotlight on the strong bond of female friendship that serves as a lifeline for young women in urban India as they adapt, flourish and rebel in a rapidly evolving societal culture with changing gender roles. Helmed by a predominantly women cast and crew, the show has been written by Devika Bhagat, with dialogues from Ishita Moitra.
The show takes a close look at the lives of four young, urban Indian women and gives a voice to a new generation who live and love on their own terms
The series which stars Sayani Gupta, Kirti Kulhari, Bani J and Maanvi Gagroo along with a stellar ensemble cast has an interesting twist in the tale.
Created in collaboration with Rangita Pritish Nandy, produced by Pritish Nandy Communications and directed by Anu Menon. The series, of course, casts zero judgment or moral lessons and has no man swooping in to save our women at end of the day-this is genuinely an equal worlds show! The Prime Original series will be available exclusively for Prime members on 25 January 2019across more than 200 countries and territories.
Featured Video