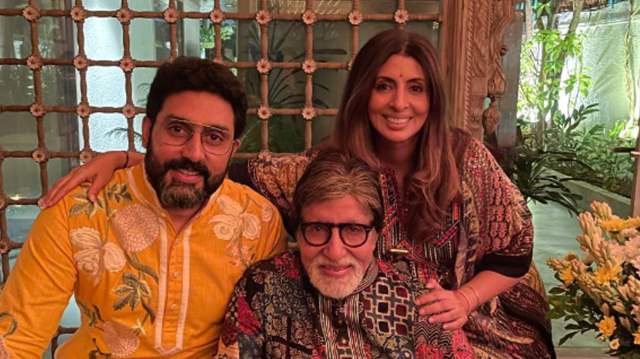 The living legend Amitabh Bachchan celebrated his 80th birthday yesterday and the whole nation seemed to be involved in his shenanigans. As it is quite evident, social media was flooded with pictures and videos of the megastar as they extended their wishes and greeting to him. His family members also made sure that his 80th should be a spectacular.

Now Shweta Bachchan Nanda offered fans a glimpse at how they ended the remarkable day with a bunch of adorable pictures. In the first pic, she is seen posing with her dad, as they twin in ethnic ensembles.

Amitabh is seen clad in a printed, multi coloured kurta with golden borders, while Shweta is donning an embellished kaftan. In the next picture, Abhishek can be seen in a bright yellow kurta, looking all dapper with his sister and father.

The trio posed for the camera while beaming with joy. Sharing the pictures, Shweta wrote, "Twinning & Winning - perfect end to an incredible day 🤍🤍🤍".

Earlier yesterday, Abhishek Bachchan also posted a video of Jaya Bachchan and him surprising Big B on his birthday on the set of Kaun Banega Crorepati 14. Additionally, he penned a lengthy comment detailing the effort and secrecy required to surprise the megastar on his big day.

Meanwhile, on the professional front, Amitabh Bachchan's film 'Goodbye' is currently runing in the theatres. The film also featured Rashmika Mandanna, Neena Gupta, Pavail Gulati, Sunil Grover and others in key roles. Next he will be seen in Sooraj Barjatya's film 'Uunchai'. The film is set to hit the big screens on 11th November.