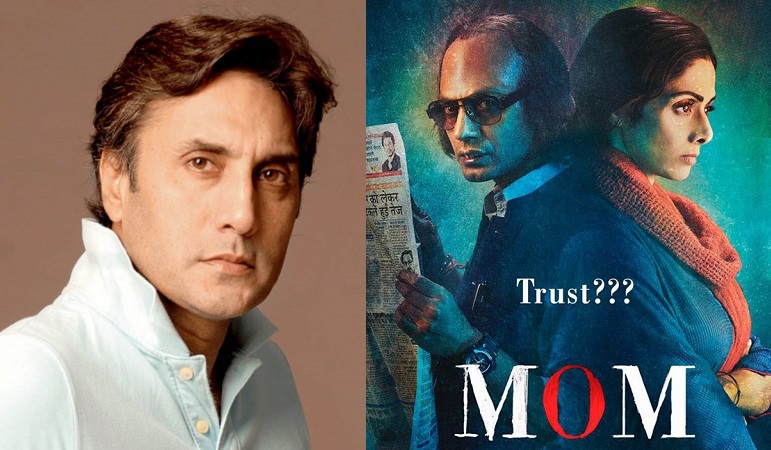 One of Pakistans most prominent actors, Adnan Siddiqui who played Sridevis husband in "Mom", says that people in his country loved the film and are ecstatic about the collaboration between two nations.

He also spoke about the rapidly deteriorating relations between India and Pakistan and why artistes from both the countries need to rise above the politics.

Q. "Mom" opened to very encouraging review for you and Sajal Aly n India. How has it been received in Pakistan?

A. A good product is well-received everywhere. People here in Pakistan have loved the film and are ecstatic about the collaboration between the two nations.

Q. Tragically you and Sajal Ali could not be a part of the film's promotion and release... Tell me your honest deepest thoughts on not being able to be in Mumbai for the opening of your film?

A. Obviously it is a sad feeling when you are not able to promote a project you have spent tiring days and nights working on. But then you are relieved that the promotion lies in more than capable hands, for the likes of Sridevi and Nawaazuddin Siddiqui and Akshaye Khanna.

Q. Before you, Fawad Khan and Mahira Khan could not be in India for the release of their big films. How do you look at this situation where artistes from Pakistan are being left out of their moment of glory? Is there a growing sense of resentment among Pakistani artistes for this state of isolation?

A. I wouldn't go as far as saying there's resentment to this situation. But I would agree it is hurting the relations between artists of both the countries. The politics may steer a situation in any direction but the people of both countries love and respect art for what it is. They don't see passports when they purchase a ticket, they see a film.

A. No matter how hard people try, our cultural ties will come out strong. We share more than just the colour of our skins, we share history, we share values, we share customs and it is just a matter of time we will start sharing our artists, directors, writers, technicians on a large scale too. I honestly believe we can find peace in art.

Q. In fact, you have produced a TV series on the Hindus in Pakistan and have constantly championed India-Pakistan peace. Is that hard to do when hostility seems fashionable?

A. No, it isn't. As I said, people of the both countries are smart enough not get themselves into politically incorrect situations. My production of "Seeta Bagri" was extremely well perceived and people in Pakistan supported its message of tolerance and brotherhood.

Q. How did you decide to work in "Mom"? And was it difficult to shoot for the film with growing political hostilities between the two countries?

A. Once I got the offer, I couldn't resist myself from saying yes since I knew I would be playing a role against Sridevi and I was also aware that Sajal Aly from Pakistan, who is a beautiful actress, is part of the cast. The political hostility as you say did create hurdles for the film. However, it was Boney Kapoor Saab who became the leader and crisis-breaker, sorted out the production issues and took us all home for a win.

Q. You are a known face and name in India, thanks to your wonderful television serials which have amply demonstrated your range. Tell us about your experience of becoming a television star before capturing cinema?

A. My journey in the media industry started with my modeling career and it took off with a casual role in a drama serial. People were extremely kind in accepting me as an actor when I knew nothing and since then, I am trying to prove to them, my fans, that they were right about me.

Q. Does the film industry in your country offer you enough opportunities as an actor?

A. The New Cinema, as I like to call it, is a growing baby. There are a lot of players with growing ambitions, hence it is creating opportunities all across the board which is a beautiful sight. However, since it is an evolving industry, we will need time to eradicate the mistakes and enhance the strengths.

twerping 3 years ago Yet to watch Mom but loved him in Sammi! Really enjoyed reading the interview. Am eager to catch Seeta Bagri now. As an Indian fan of Pakistani dramas, am always eager to see artists from Pakistan acting in films made in Bollywood. If politics keeps the likes of Fawad Khan out of Bollywood, ultimately the loss would be bollywood's. At present there is not a single Hindi film actor who could come close to the talent+charisma of Fawad. There are excellent character actors in Bollywood but he is the perfect person to be the matinee idol of our age.
But I digress. After Sammi, eagerly waiting for Adnan's next project.

nikki.171 3 years ago Not really seen much of him off screen but from the little I've seen, he is a very wise and understanding. Haven't watched Mom but the promo looked wonderful so will definitely be giving it a watch. Good Luck to Adnan Siddiqui Sajal Aly Nawazzudin Siddiqui and Sridevi Kapoor