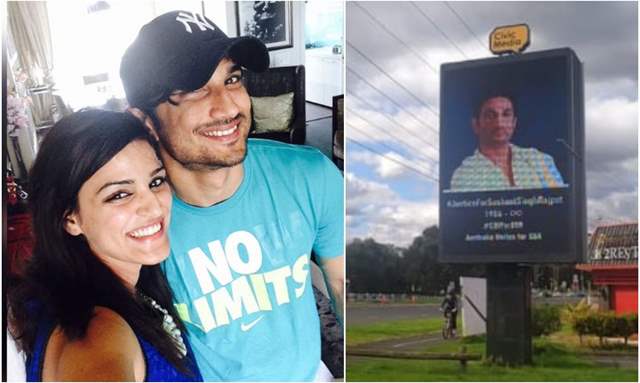 It’s been more than two months since actor Sushant Singh Rajput died on June 14 2020. What at first looked like a suicide is now being investigated intensely by the Central Bureau of Investigation (CBI).

Today on August 17, Sushant's sister Shweta Singh KirtiShweta has shared yet another post showcasing the various billboards standing strong in Australia in memory of Sushant Singh Rajput. She penned a heartfelt note as she shared:

“SSRians across Australia made it happen. 7 Billboards are up throughout the continent. Their abundant love for Sushant made this happen. These Billboards are definitely going to convey the strong message that the whole of Australia is standing with SSR. They really want their screams to be heard by the whole Judiciary System of India so that fair justice can be served to their dear Sushant. #GlobalPrayersForSSR #JusticeforSushantSinghRajputm#CBIForSSR #scmonitoredcbi4ssr”

Shweta also added the seven locations where the billboards were located:

A few minutes ago, Shweta also shared a video as she wrote: "?Prayed to Kaal Bhairav today and asked him to guide and lead us to the truth."

Sushant’s family is fighting for justice to be served and his sister Shweta Singh Kirti had requested his fans all across the globe to join for a Global 24-hour spiritual and prayer observation for the late actor. She had also posted a picture of Ankita Lokhande with folded hands as they prayed for Sushant.