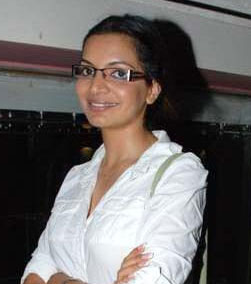 Featured Video
Shweta Kawatra's bindas attitude and unabashed bashing of the cine stars have caught quite a few in the wrong foot and on the wrong note.

"She is dangerous is what I get to hear often' chortles the spunky actress. 'I have been sent quite a few warning notes and sue letters,' the beautiful actress discloses.

Far from fazing her, this delightful anchor actually finds them to be funny as she adds gleefully, "Maybe I will frame them one day". Picture perfect, isn't it?

So was that why Saroj Khan so blunt with you on nach Baliye2? We ask wickedly. 'Don't know about Saroj Khan but I was scared of Malaika's reaction as I have bashed her sister Amrita Arora as well as her brother-in-law Salman Khan quite unashamedly in my show,' admits Shweta,' but I think she understood that I was just doing my job and that I am not really mean.'

Oh yes, we agree. Shweta is definetely a sweet person and so unlike the negative characters she portrays on screen..

'Many have come to my defense saying that after all I am just reading from the script. The truth is, I have been doing this for close to six years and still I thoroughly enjoy doing it. '

+ 5
15 years ago oooooooooooh I love her, and how she talks on the show. it is just so cute. and has just the right expressions for everything she says. nothing over done!!!!!

she is one of my fav actress.


Thanks for the article!

I really love her!!

15 years ago i love watching her show, it one of the best shows on tv
keep up the gr8 work

15 years ago Oh I love watching her in Current Bollywood. She's too funny and a great anchor. I don't blame her either. She's just doing her job! That too pretty well. lol.

15 years ago nice article!! It aint her fault. i like hertoo!!
thnx 4 d article

15 years ago which show is she talking about..
thannks for the article. :)