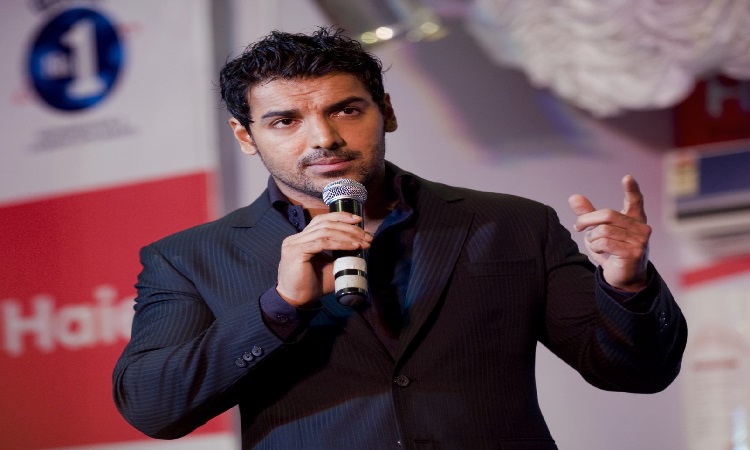 A day after National Award-winning actress Kangana Ranaut asserted that celebrities must speak up on issues of the country, actor John Abraham says it would make sense for someone to make a political statement only if the individual is well-versed with the larger political situation of the world.
During the success party of her film "Manikarnika", Kangana said that actors should raise their voice on political issues as they have the power to influence people.
Asked if stars must speak out on politics, John said here: "I think being an actor, if you are politically aware, which Kangana is, and she has a voice, then one must take a stand.
"But as I said, if only you are politically aware... you should not be stupidly talented. If you are an idiot who does not know which country lies where, and if you are not aware of what's happening from Bihar to Syria, then you should just shut up... Unless you are aware, then only make a statement."
His upcoming film "RAW (Romeo Akbar Walter)", releasing on April 5, is based on the real-life story of a spy. John said the film's team is responsible enough to tell the story.
Speaking on behalf of the team, John said: "We are politically aware people. We shot some parts of the film in Kashmir, so we know the grassroots level issues that exist in Kashmir. We understand what is really happening there.
"I think making a statement at the right time is important rather than saying something for an effect, to pretend... you know, so that one can trend (on social media)."
When the actor was asked about the escalating tension between India and Pakistan post the February 14 Pulwama attack.
John said: "There has to be a war against terror(ism) and not against a country or any religion. I am very clear with my outlook on that.
"I am not one of those actors who will say that 'People will like this, so let's do it'. I say things as it is. These days, polarization is happening and that is dangerous."
Asked if the plan to release the film at a time when patriotism is on a new high would favor the box office business of the film, John said: "We do not want to sound like opportunists in this current situation because we had decided to release the film around this time almost a year ago.
"Back then, the situation was certainly not the same. However, keeping the present in mind, I think in the current ecosystem, it resonates with what is happening in the country."
John plays the protagonist in the film, which also features Jackie Shroff, Mouni Roy, Sikander Kher, Raghubir Yadav in pivotal roles.
0 Likes

“Rama Shetty from Mum Bhai will be a character close to my heart for ...