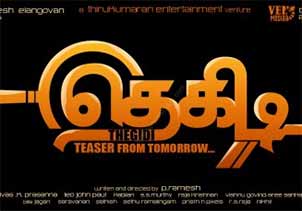 Director P. Ramesh says that the sequel to the recent Tamil hit "Thegidi" is on the cards, but it will not happen immediately. He has started working on a fresh story which he intends to finish first, he says.

"'Thegidi 2' is definitely on the cards, but it won't happen immediately. I have started working on a new project which I intend to work on before the sequel," Ramesh told IANS.

Ramesh planned the sequel even before the release of "Thegidi".

"I didn't have a bound script ready for the sequel, but I had decided to continue the sequel with Vallabha's character that you see in 'Thegidi'. I decided this while working on the prequel," he added.

Crime-thriller "Thegidi", which featured Ashok Selvan and Janani Iyer in the lead, was one of the few hits of the first quarter of the year in Tamil filmdom.

Munisha Khatwani postpones her marriage for the third time

Rakul's reaction upon hearing about her role of a 'condom tester'; ...